Wat Buddhamongkolnimit was established in 1994 to promote the teaching of the Buddha or the religion known as “Buddhism” primarily to the Thai, Laos people in Albuquerque, New Mexico and neighboring cities. The Thai, Lao people come to the temple for all religious ceremonies that follow the same traditions that have been followed in the past by their ancesters in Southeast Asia. At the temple, the people have the opportunity to receive instructions from the monks on the teaching of the Buddha. 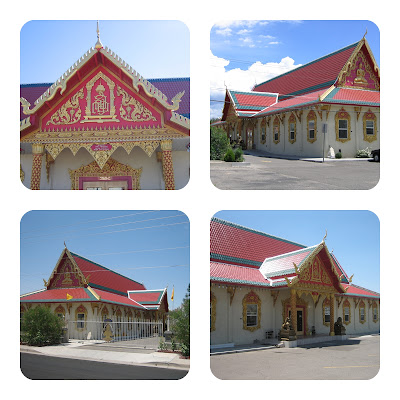 
Have sufficient fund, Thai; Laos’s people conceived the idea of establishing temple and monks to perform religious activities in order to increase the involvements and support of the communities in the area. The old temple was located at 224 Alcazar St.,Albuquerque, NM. The 1st president was Phrakru Sangharak Manas Katapunyo (Khammamoon).
Wat Buddhamongkolnimit received an official permit as a non-profit organization on June 8,1994. Phrarajkittivedhi,the president of Thai Sangha Council in USA, held the Grand Opening Ceremony on October 8,1994. 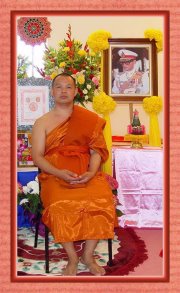 On November 3,1997, the 1st abbot of Wat Buddhamongkolnimit pass away. The Executive Committee and members have been  elected Venarable Charern Sukhawatthano (Suksaeng) as a new abbot. He still holds this position today. And He gets the New Title Name as Phrakru Soponsassanavited on 2003.
A MONK’ S DAILY ROUTINE
A daily life of Buddhist monks at Wat Buddhamonkolnimit is mostly a routine matter with the following Schedule:

**************************
The Main objectives of establishing the Buddhist Temple in Albuquerque, New Mexico are to these followings
a).  To propagate Buddhism to the public.
b).  To educates the public concerning Buddhism and related subjects.
C). To teaches Buddhist meditation techniques to the public.
D). To Share the knowledge among the other religion and mutual understanding each other.
Wat Buddhamonkolnimit is a non- profit organization, which was established as a Meditation Center in Albuquerque. The Wat is serving all communities in Albuquerque especially Thai, Laos, Asian and American people. The Wat is the focal point for cultural and educational activities of the communities, as well as, an information center for one who interested in Buddhist studies.


10.The ending of Buddhist Lent Day